Psychiatry Professor Dr. Ray Blanshard  has described and categorized what he referred to as male “transexuals” into types.  Dr. Blanshard’s research describes that some transexuals are homosexual males (androphilic) who are very effeminate and wish to further feminize themselves and live as women.  However, he also described another kind of transexual which are heterosexual males who are sexually aroused to the idea of themselves as women.  They are turned on by wearing female clothing and may also be aroused by female biological functions (eg: menstruation) or what they see as other “female behaviours”.  Dr. Blanshard coined the term “Autogynephilia” to describe this sexual fetish.  Dr. Blanshard described differences between the groups.  Homosexual males reported experiencing gender dysphoria as young children, identified as girls or women from an early age and are observably effeminate.  In contrast, autogynephiles reported they became interested in female vestiture and/or their feelings of being a woman began in adulthood, and they are not observably effeminate or gender-non-conforming – most are conventionally masculine.  The sexual arousal component is specific to the autogynephiles.

When most people think of “transwomen” they imagine those very sympathetic, effeminate homosexual males who fully transition and can “pass” for women – this is who they imagine will be using women’s toilets and safe spaces and it is easy to sympathize.  It is much harder to sympathize when one realizes that a huge proportion of “transwomen” are heterosexual males with a sexual fetish, and their motivation to enter women’s spaces is not safety but arousal.  Trans-activists refuse to acknowledge the existence of autogynephiles and instead push the narrative of the “vulnerable trans woman” who just wants to pee.  Yet back in 1987, when Dr. Blanchard did his research and looked at the relative numbers of androphilic and autogynephilic males, the autogynephilic  cases were already the majority at 60% and this rose to 75% by 2010.  So the majority of trans-identified males are autogynephiles.

It is important to understand the role that autogynephilia plays in trans-activism, for it is a prime motivator for their desire to penetrate into women’s spaces while masquerading as a human rights movement.  Autogynephilia is the Trojan horse of trans-ideology.

This isn’t to say that autogynephiles do not have a right to their sexual interests if they aren’t harming anyone, but they have no right to compel participation of women in their sexual fantasy.

It is not the job of women to facilitate the sexual fetish of autogynephiles. 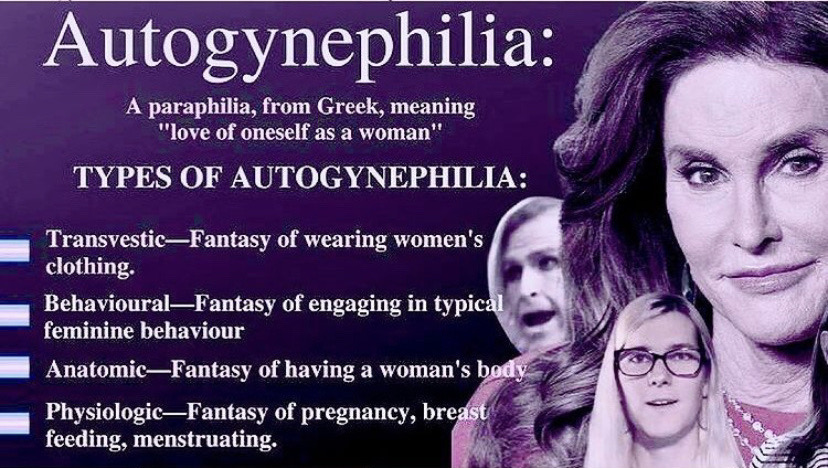